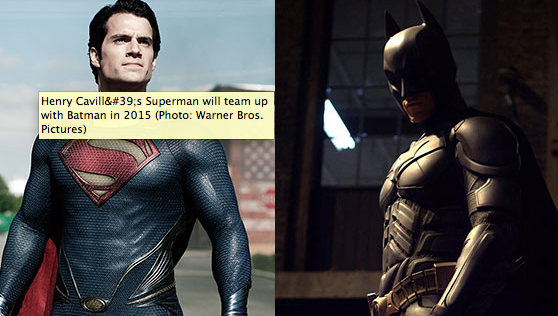 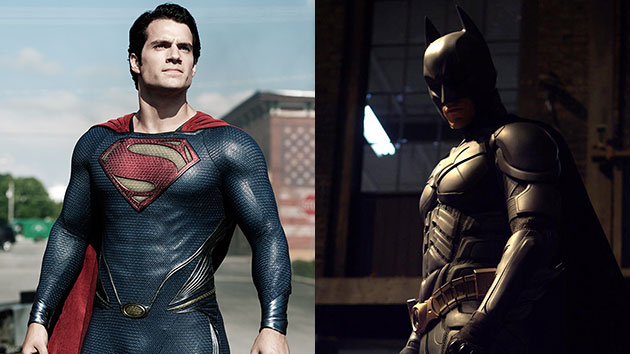 Henry Cavill’s Superman will team up with Batman in 2015 (Photo: Warner Bros. Pictures)

UPDATE: Director Zack Snyder officially announced that Batman will indeed appear in his follow-up to “Man of Steel.” He said in a statement, “I’m so excited to begin working again with Henry Cavill in the world we created, and I can’t wait to expand the DC Universe in this next chapter.  Let’s face it, it’s beyond mythological to have Superman and our new Batman facing off, since they are the greatest Super Heroes in the world.”

At the panel a logo for the movie was revealed that combines Superman’s “S” shield (yes, we know it’s not an “S”) with the Bat-symbol, which notably looked different than the one in Christopher Nolan’s trilogy. They also used a quote from Frank Miller’s groundbreaking graphic novel “The Dark Knight Returns” where Batman and Superman engage in a fight to the finish. In it, Batman says, “I want you to remember my hand at your throat. I want you to remember the one man who beat you.” Apparently, the new movie won’t be a straight adaptation of that comic book but will use elements of the Batman/Superman rivalry from the text. In addition to Henry Cavill, Amy Adams, Laurence Fishburne and Diane Lane will return, but Batman has yet to be cast.

Superman took flight again this summer in “Man of Steel,” which has so far taken in over $280 million in the US and over $620 million worldwide, making it the #2 movie at the box office for 2013 (“Iron Man 3” sits securely at the top spot). Naturally, Henry Cavill is set to step into the character’s red boots again, but at the Comic-Con today, there was surprising news that he’ll be joined by another caped superhero.

Batman will team up with Superman in the next movie, The Hollywood Reporter and the Los Angeles Times confirmed Saturday morning. “Man of Steel” director Zack Snyder and screenwriter David Goyer (who also worked on “The Dark Knight” series) will return for the film expected to be released in 2015. Christian Bale, however, is not expected to return as the Caped Crusader.

There was speculation that Warner Bros. would follow “Man of Steel” with a “Justice League” movie that would bring together all of the major heroes from the DC Comics world, including Wonder Woman, but that has been pushed back. Instead, they will follow the Superman/Batman team up with a movie for the super-speedy hero The Flash in 2016, and follow with “Justice League” in 2017.

See Photos of Superman Then and Now:

SUPERMAN’S SUITOne has red shorts. The other does not. Because, apparently, in 2013, we just can’t take the red shorts seriously any more … at least according to Zack Snyder. Let’s just say that … more
1 / 12
Yahoo! Movies | Photo By Everett / Warner Bros.
Share to FacebookShare to TwitterShare to Pinterest
Close
Previous image
Next image

This will be the first time the two biggest names in DC Comics will share the big screen, but it almost happened once before over a decade ago. After the embarrassing “Batman & Robin” in 1997, several reboots of the Caped Crusader were proposed, including “Batman vs. Superman.” Director Wolfgang Petersen (“Air Force One”) was attached to a script by “Seven” screenwriter Andrew Kevin Walker that would have pitted the two against each other, but that project was eventually scrapped for Christopher Nolan’s “Batman Begins.”

Batman and Superman, who partnered up in the comics under the title “World’s Finest,” will have another superhero team to watch out for when they hit the screen. Marvel’s “The Avengers 2” has already been announced to open that same year on May 1, 2015.

Who do you think should be the next Batman? Tell us below in the comments.