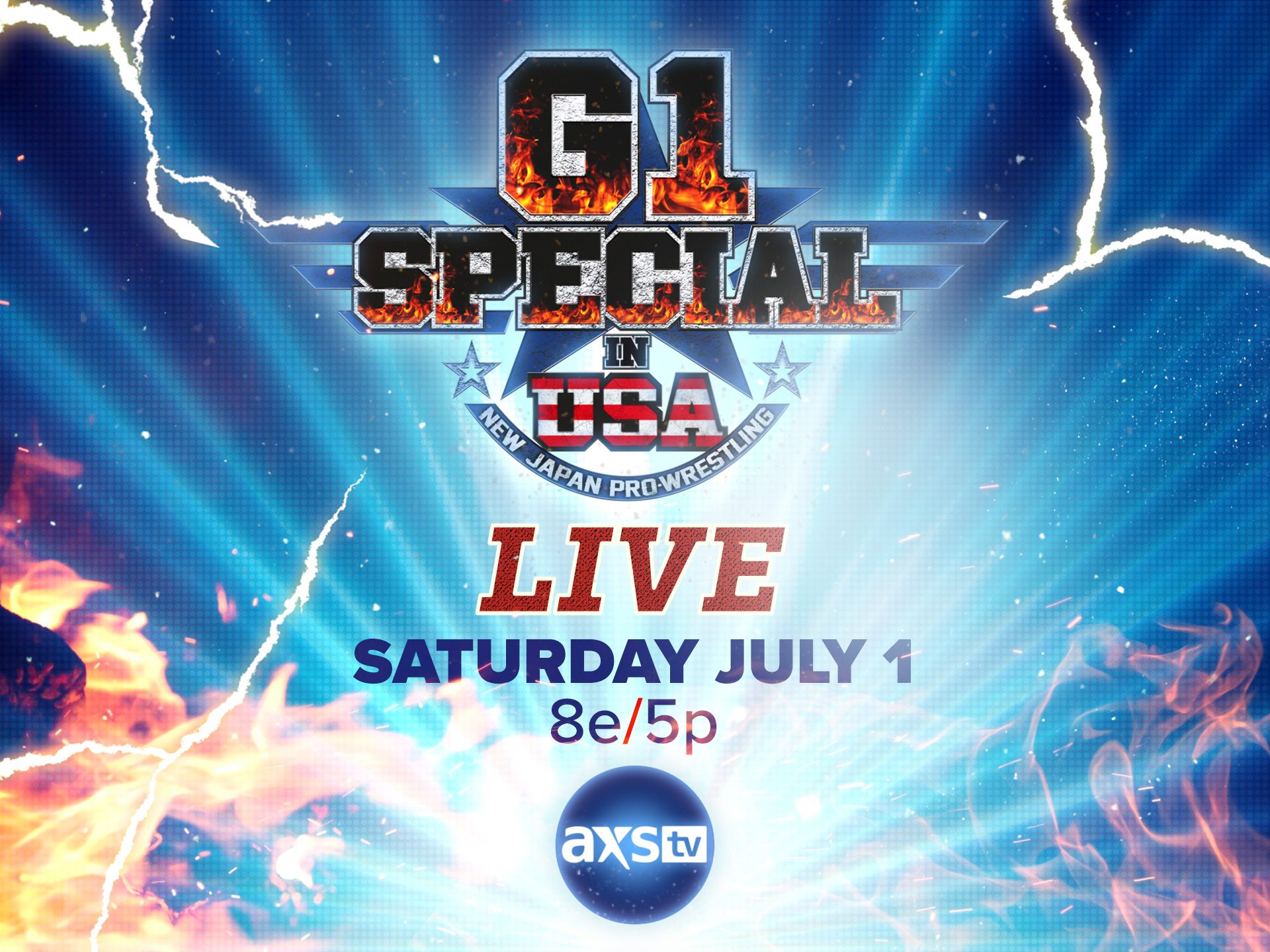 The Historic Broadcast is AXS TV’s First Live NJPW Broadcast and Marks the Promotion’s Biggest Step into the U.S. Market

Night Two Premieres in Its Entirety on AXS TV, Friday, July 7 at 8pE

Catch Up on the Most Recent NJPW Events Friday Nights in June on AXS TV Leading Up to the Event Including New Japan Cup, Sakura Genesis, Dominion and More

Following Saturday night’s live event broadcast of the G1 SPECIAL, AXS TV will premiere the second night of the event in a four-hour showcase on Friday, July 7 at 8pE/5pP. The special presentation will feature every match from night two in Long Beach with limited commercial interruption.

The G1 SPECIAL marks AXS TV’s first live broadcast of NEW JAPAN PRO WRESTLING, the world’s fastest growing and second largest wrestling promotion, which the network has showcased on Friday nights in its award-winning, hour-long weekly series since 2015. AXS TV’s NJPW broadcast team—Wrestling Hall of Famer Jim Ross and former UFC Heavyweight Champion and NJPW veteran Josh Barnett—will be ringside for both nights of the event to call the action for the network.

“New Japan is coming to the U.S. for the first time in its illustrious 45-year history,” said AXS TV FIGHTS CEO Andrew Simon. “The timing for the first-ever U.S. event and live TV broadcast is perfect—the weekly NJPW television show on AXS TV is a hit and the tickets for the G1 SPECIAL in the USA sold out within hours. We are excited to see how fans respond to this historic live broadcast.”

“New Japan Pro Wrestling is simply delighted to have our very first event in the United States, and to have it air live on TV marks a major breakthrough for the Japanese pro-wrestling promoters,” said Mr. Naoki Sugabayashi, Chairman of the Board, New Japan Pro Wrestling. “It is definitely going to have the most exciting matches by the most formidable wrestlers… don’t miss it!”

“New Japan Pro Wrestling has been one of our most important partners over the years and we are absolutely excited that NJPW is now holding its premier major event in the United States,” said Mr. Hitoshi Matsumoto, Deputy General Manager, Business Division, TV Asahi. “NJPW content is a big success in Japan supported by fans of all generations and genders, so we do hope the viewers in the United States will find themselves hooked with the same explosion of excitement.”

“This is going to be one of the most eagerly anticipated events that I have broadcast in my 40+ year career,” said Jim Ross. “Restaurant-quality slobberknockers will be abundant on this historic weekend of pro wrestling excellence.”

“New Japan is bringing the lead in to the most prestigious tournament in the world of professional wrestling to the U.S.,” said Josh Barnett, “and I am pumped to call the blood, sweat, and tears ringside with J.R.!”

Leading up to the live G1 SPECIAL broadcast, AXS TV will give viewers the opportunity to catch up on the latest NJPW events during the networks’ Friday night series with the “Summer of Strong Style” event showcasing all of the promotion’s 2017 events. Upcoming episodes include top matches from New Beginning in Sapporo and Osaka; New Japan Cup; Sakura Genesis; Wrestling Toyo and Dontaku; and, the night before G1 SPECIAL—Friday, June 30—back-to-back episodes featuring June’s Dominion 6.11 event.

Following the G1 SPECIAL, AXS TV will continue to showcase NJPW events closer to their original airdate during its Friday night series, starting with the Best of the Super Juniors and the G1 Climax 27 tournament.