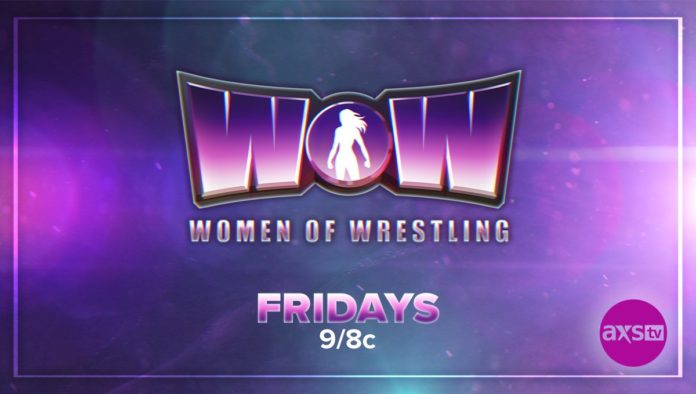 Los Angeles – (June 11, 2019) – Based on its tremendous success, professional wrestling is getting to star on its own night when AXS TVunleashes a hard-hitting tag-team lineup featuring the groundbreaking all-female promotion WOW – Women Of Wrestling and the critically acclaimed New Japan Pro Wrestling—airing every Saturday night in primetime, starting July 13.

WOW debuts on its new night and time on July 13 at 8pE/5pP, beginning an eight-week event re-capping the series’ entire first season—allowing fans to relive unforgettable moments such as Tessa Blanchard, Jungle Grrrl and Santana Garrett’s three-way Championship brawl, while giving new viewers a chance to catch up on the blockbuster drama and larger-than-life Superheroes that made WOW one of the most-watched same-day series in AXS TV’s history. It all leads up to the season two premiere on September 7 at 8pE/5pP. The upcoming 24-episode season finds the hit promotion back with a vengeance, presenting a fight card packed with even more talent, spectacular bouts, pageantry and bitter feuds, and a single elimination tournament where the WOW Tag-Team Championship will be crowned. WOW founder David McLane and Stephen Dickey will once again be on hand to provide analysis and commentary, as a slate of new and returning Superheroes vie to take WOW’s coveted championship belt from reigning champion Tessa Blanchard.

New Japan Pro Wrestling follows WOW – Women Of Wrestling at 9pE/6pP on Saturdays. To set the stage for NJPW’s move to Saturdays, AXS TV will present a special live broadcast of Night 1 of the promotion’s highly anticipated G1 CLIMAX 29 Tournament in Dallas on July 6 at 6pE/3pP. The event kicks off an unprecedented six-week stretch of same-day, near-live coverage of the G1 CLIMAX which is universally recognized as the greatest tournament in professional wrestling. The tournament is expected to include thrilling matches featuring IWGP Heavyweight Champion Kazuchika Okada; “The Golden Star” Kota Ibushi; Los Ingobernables de Japón trio Tetsuya Naito, EVIL, and SANADA; “The Master of The Century” Hiroshi Tanahashi and Bullet Club leader Jay White. Every Saturday night, AXS TV will deliver two hours of high-octane coverage of NJPW’s Saturday G1 CLIMAX events that will be voiced by acclaimed play-by-play broadcaster Kevin Kelly. AXS TV’s same-day coverage will continue through the tournament’s A Block Final on August 10, followed by special presentations of the B Block Final on August 17 and Tournament Final on August 24.

About WOW-Women Of Wrestling (WOW)

WOW-Women Of Wrestling, the leading women’s professional wrestling organization, is owned by Jeanie Buss in partnership with David McLane. It is the premier organization and content provider for live events and programming featuring women’s professional wrestling. WOW’s empowered women come from all different backgrounds and professions, and are marketed as WOW Superheroes, the main attraction of every WOW presentation. WOW’s current digital ecosystem, also known as “WOW World,” consists of its website, Facebook, Twitter, Instagram and YouTube channel, with broadcasts on AXS TV.  For more information about the WOW Superheroes, visit www.wowe.com.

New Japan Pro Wrestling (NJPW) is the largest wrestling organization outside of the USA, with over four decades of decorated history, their most recent Wrestle Kingdom event in Tokyo was presented in front of over 40,000 fans. Home to some of the biggest names ever in Pro Wrestling, their current stars headed by Kazuchika Okada, Tetsuya Naito and Hiroshi Tanahashi are worldwide attractions and the company has offices and partnerships from the USA to UK to Australia/New Zealand.

Launched in 2012 by visionary entrepreneur CEO Mark Cuban in conjunction with AEG, Ryan Seacrest Media, Creative Artists Agency (CAA), and CBS, AXS TV has established itself as the premier destination for music and entertainment programming. The network delivers an eclectic programming roster that includes original series such as The Big Interview With Dan Rather, Rock & Roll Road Trip With Sammy Hagar, and Real Money, as well as hard-hitting mixed martial arts events, and a slate of acclaimed documentaries and iconic concerts from some of music’s most influential artists. AXS TV is also the U.S. home of the popular New Japan Pro Wrestling and WOW-Women Of Wrestling promotions and Legacy Fighting Alliance (LFA).  AXS TV is currently available nationally in the United States and parts of Canada, Mexico, and the Caribbean. For a list of providers, visit axs.tv/subscribe. For more information, see www.axs.tv. Follow AXS TV on Facebook,Twitter @axstv; Instagram; and YouTube.