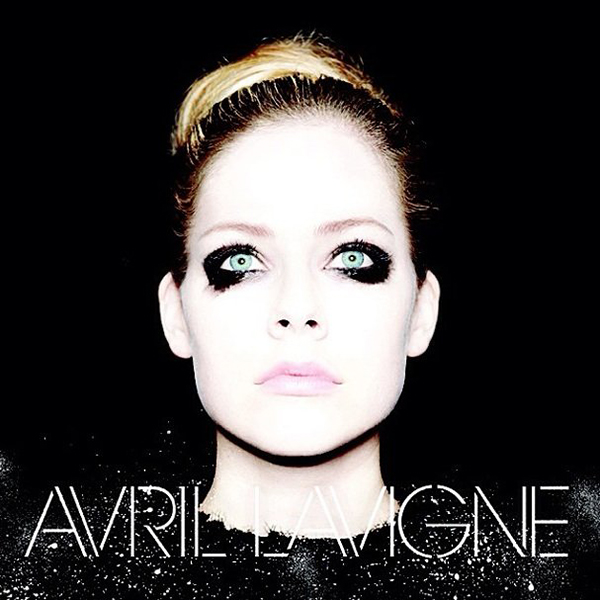 (Yahoo!) – It seems fitting that the cover of Avril Lavigne‘s forthcoming self-titled album is a strong and striking self-portrait. Lavigne revealed the cover art for the new record via Instagram late Thursday night, and it features the former teen queen looking all grown up, despite the fact that the lead single from the album is called “Here’s To Never Growing Up.”

The close-up portrait of the singer shows her eyes ringed with smudged black eyeliner, emphasizing her porcelain skin and bright blue eyes. She’s wearing a sparkling black top and her hair is pulled back tightly into a bun on the top of her head. What’s more, she’s staring defiantly ahead, gazing headstrong into the distance.

She sported a similar make-up look as a rock ‘n roll prom queen in the recent video for the aforementioned “Here’s To Never Growing Up.” The album, which is reportedly due out in September, also features the new single “Rock N Roll,” which was co-written by her husband, Nickelback frontman Chad Kroeger.

The follow-up to 2011’s Goodbye Lullaby will be her first album for Epic Records after leaving RCA Records. Lavigne says that it features various styles and is more “upbeat” and “feel good” than her last album. “The record’s really diverse,” Lavigne told Billboard. “We’ve got these pop-rock tunes, and then these piano ballads with orchestras. I have a heavier song that Marilyn Manson’s on called ‘Bad Girl,’ and then I’ve got a song called ‘Hello Kitty’ that sounds like nothing I’ve done before. ‘Here’s To Never Growing Up’ is one of the rock tunes on it, but it’s all over the place.”

Based on her comments and the new cover art, it looks like it’s going to be a wild ride – even if you can’t judge an album by its cover.