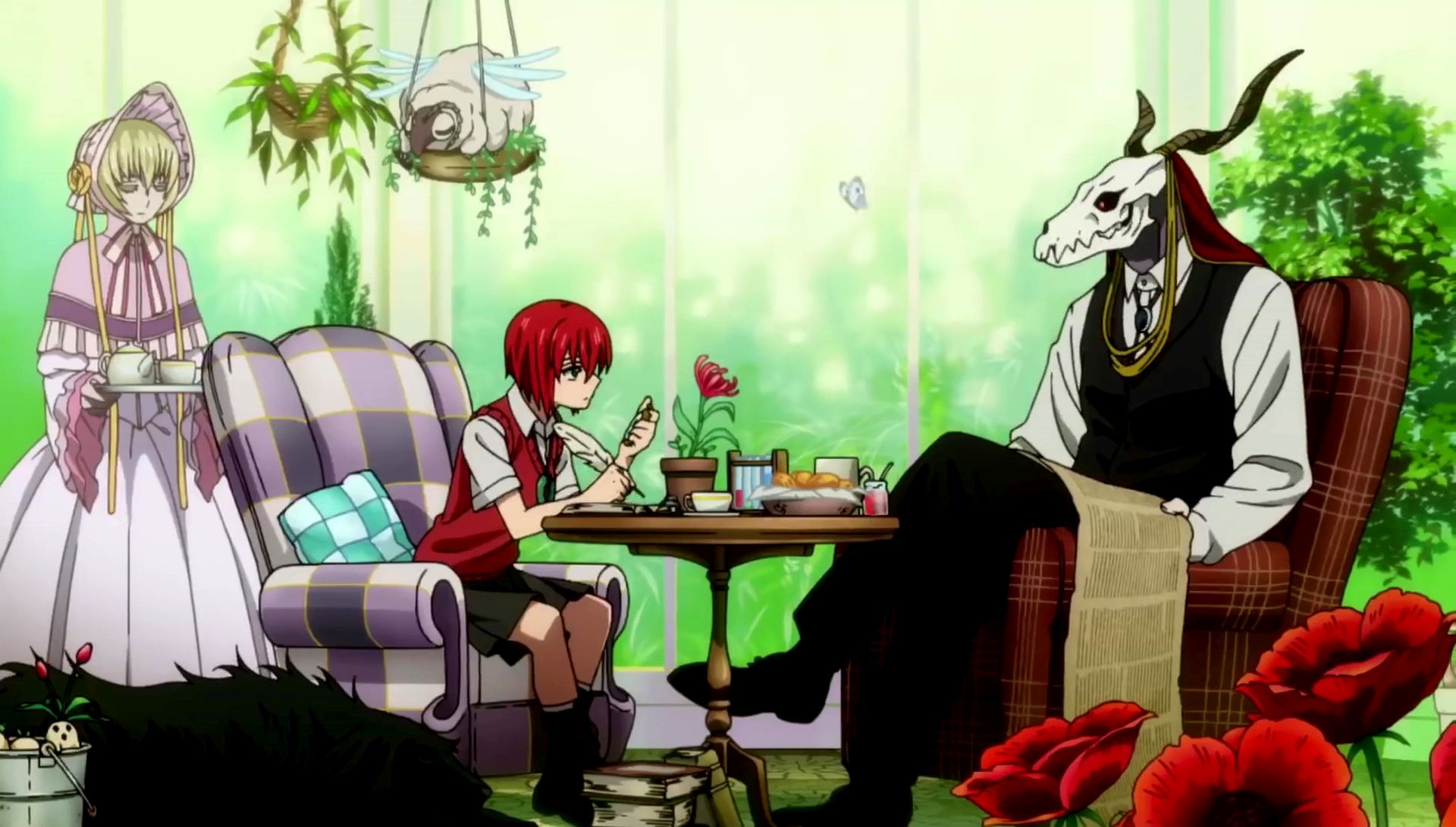 This Wednesday, the anime streaming site Crunchyroll hosted an exclusive theatrical release of the television adaptation of the popular manga The Ancient Magus Bride. The shonen fantasy series, published in Mag Garden’s Monthly Comic Garden, portrays a young Japanese girl’s foray into the world of magic after she puts herself up for auction as a slave and is bought by a mage with a monstrous appearance who decides to make her his apprentice. It didn’t seem to be too overtly advertised, given that I stumbled upon this screening when looking for upcoming movies on my local theater’s website, but I jumped at the chance to see a manga I enjoyed be brought to life by Wit Studio, known recently for their work on Attack on Titan and Kabaneri of the Iron Fortress. I joined a friend and surprising amount of other theater patrons to see the first three episodes of this series, which have previously only been seen at the recent Anime Expo.

I will have to admit that the episode format didn’t work too well in a theater environment. The episodes were shown immediately one after the other, with no openings or endings between them. The cuts where one episode ends and the next begins were obvious and a bit jarring, and in the third episode there was a short flashback to something we had seen just minutes ago in the previous episode. While I think these kind of detract from the viewing experience, these are elements that will be much less obvious with its weekly episode format in the fall season.

There were also some minor elements glossed over, such as the explanation of why dragons read minds in the third chapter, but for the sake of time constraints I suppose I can’t expect everything to be included. In addition, while there was only one genuine grammatical error that I could find in the subtitles, it was a bit odd to see that Crunchyroll uses Seven Seas Entertainment’s translation of Chise as a “Sleigh Beggy” rather than the “Slay Vega” used by fan translations of the manga. Of course it makes sense for their company to use the translation of the ones who license the North American release, and “Sleigh Beggy” does have some (admittedly unrelated) significance in magical lore, but the voice actors pronounce the second word as “beygah.” There’s a bit of a disconnect between what the viewer hears and what he sees, like for all of the copyright avoiding name changes in the licensed translation of JoJo’s Bizarre Adventure.

These drawbacks are fairly minor compared to the good points of this anime’s presentation, however. One change that was for the better in my opinion was the swapping around of a few scenes in order to improve the pacing, which can be quite important given that each episode covers approximately one of the manga’s relatively long chapters. The animation is fantastic, with beautifully animated spells and quite cute spirits and dragons. The backgrounds, which provide a break from the usual Japanese scenery in favor of rural London and the wilds of Iceland, were breathtaking as well, and their enjoyment was made all the better by the orchestral soundtrack that ranged from playful and light to dark and mysterious. The voice acting was pretty good overall, but Ryouta Takeuchi’s delivery of Ainsworth’s “straight-faced” jokes were particularly memorable.

I was also presently surprised to find that Crunchyroll aired the pilot of their new series, Children of Ether, before The Ancient Magus Bride. A unique work that’s directed by LeSean Thomas, whose works include The Boondocks and Legend of Korra, and animated by anime veterans such as Mitsuo Iso of Neon Genesis Evangelion fame, it has the feel of being a sort of “American anime” in the way that Avatar: The Last Airbender did. This series, however, is targeted towards older audiences with its urban dystopian setting and bloody action scenes. Perhaps what’s most interesting is that in addition to having character designs from Hiroshi Shimizu, who worked on Michiko to Hatchin, it’s also influenced by Michiko to Hatchin‘s portrayal of people of color in anime. While I was mostly excited to see how The Ancient Magus Bride would turn out, I’m also going to be keeping an eye out for Children of Ether.

Of course, The Ancient Magus Bride doesn’t end after just three episodes; it will return in October for the Fall season, alongside other anxiously awaited series like Kino no Tabi and Pop Team Epic. Children of Ether doesn’t have an established release date as of yet, but should be announced in the near future by Crunchyroll. In the meantime, the Summer season is in full swing to make the wait just a bit easier, so enjoy it while you can!