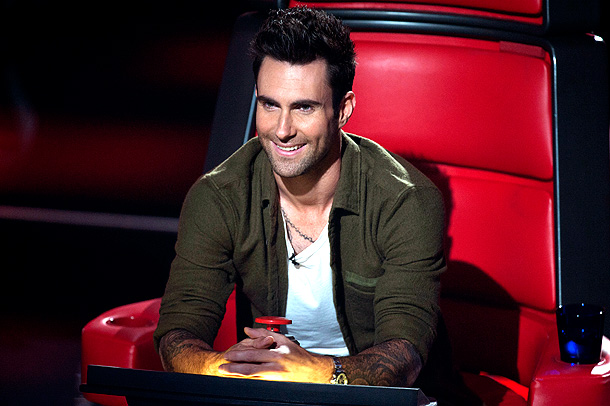 After 9 seasons of The Voice, it was bound to happen that one day, one of the coaches would ‘voice’ their opinion on what they think about the unsuccessful records of past Voice winners. For those of you who don’t know, when you become a winner of The Voice, you are offered a record deal with the Universal Music Group and from there they go to a more genre specific label.

On Tuesday, The Voice coach, Adam Levine, took a visit to Howard Stern’s radio show and discussed how he felt about what it’s like for the winners of The Voice after.

Adam was quoted saying, “I’ll be relatively cryptic about what I think the big problem is. When the baton is passed post-‘Voice,’ there’s some problems. People take over after we do this great job of building these people up on the show. There’s some real issues there.” Whoa, whoa, hold the phone. Adam does correct himself and say that it’s actually not NBC’s fault at all. Phew, that would’ve caused some trouble.

He points out that, even as the mentor, there is nothing that they can do about it. “We get so attached and so passionate about helping these guys. And now it’s become this thing where I feel like after I want to be part of it, too, to whatever capacity I can. And I’m glad I’m saying this on air so maybe the label will get angry and f— off, so we can get somebody else to do it.” At least he’s honest right?

But to put it in perspective, how many records from “The Voice” winners have been successful with work from The Voice? Let’s take a moment to look back to the past Voice winners…

Javier Colon was the very first person to ever take home the trophy as The Voice winner! Immediately after winning he released his debut album, “Come Through For You.” His album charted and peaked at #134 on the Billboard 200. Almost a year after he announced that he was parting ways with the record label due to “lack of support.” He has since moved on to a different label.

Jermaine Paul was the second winner. He was labeled as an “R&B legend in the making.” His cover of the song, “I Believe I Can Fly” made it to #83 on the Billboard 100, but his next song, “Soul Man” (featuring coach, Blake Shelton, did not make it on that list.) He has been featured on songs here and there, and his single, “I Believe in This Life,” premiered on The Voice in November 2012.

Cassadee Pope, the first female winner of The Voice. The former lead singer of Hey Monday, one of my favorites, was one of the few lucky ones post-Voice. She was the #1 spot on Billboard’s Heatseekers Songs’ chart and her debut (country) album, Frame by Frame, debuted at #1 on U.S. Top Country Albums.  She has made many appearances on talk-shows and has performed at various events/concerts. She was also nominated for Best Album and Best Female Artist in the 2014 World Music Awards.

Seventeen-year-old Danielle Bradbery had her former coach, Blake Shelton, calling her “the most important artist to ever walk ‘The Voice’ stage.” Bradbery signed a record label with Big Machine Records and released her first debut single “Heart of Dixie” in July 2013, from her first, self-titled, studio album in November. Her song “My Day” was featured in the Sochi 2014 Winter Olympics. She also joined Hunter Hayes on his “We’re Not Invisible” tour. She also toured with Brad Paisley.

Tessanne Chin won season 5 of The Voice. Tessanne performed Simon & Garfunkle’s classic “Bridge Over Troubled Water” making her cover the first song in “Voice” history to become the #1 song on the iTunes chart. This performance also took #14 on the Digital Songs chart and #5 on Heatseekers Songs chart. She was named Caribbean Journal’s 2013 Artist of the Year, premiered on “The Tonight Show with Jay Leno,” performed in the Rose Bowl Parade with season 5’s runner-ups and co-headlined Shaggy’s benefit concert. When her self-titled album dropped, it went on to chart at #41 on the Billboard 200.

Josh Kaufman has been said to be one of the most successful of the winners. While on tour with The Voice crew, he got an offer to star in the Broadway revival of Pippin. Kaufam performed as a headliner for Indy Jazz Fest and acting as Grand Marshal at the Indianapolis 500 Parade.

Sawyer Fredricks was the most recent winner of The Voice. According to Republic Records, Fredericks broke many series sales records, with nine singles, from The Voice, reaching the iTunes top 10, and 14 singles charting in the Top 200 during the final week.

With that being said, Adam has a very good point. Very few of The Voice winners have truly been successful with the label that The Voice sends them to after winning. He did, in fact, acknowledge the fact that it is not always the record labels that are to blame. “Some [winners] are huge pains in the a–es, too. A lot of artists think all of a sudden that they’re god’s gift.” Sadly, that is also very true. Some people just get too caught up in the popularity and forget who they really are.

Adam ends it with, “We do a great job. I just wish that someone on the other end was there to do it right.”