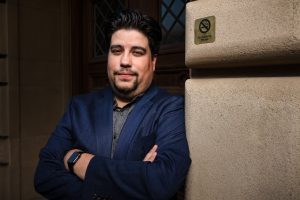 Ruben Jay is an American radio & podcast host, producer, and is the President of MultiMediaMouth.com. Born and raised in Orange County, California, Ruben grew up hearing teachers, counselors, and family friends telling him he had a “Voice for Radio” which encouraged him to jump into the world of broadcasting.

At 6 weeks old, Ruben was taken from his birth mom and placed into foster care. He was later adopted by his foster parents at the age of 2 years.

In 2011, Ruben graduated from Sonora High School and began to ponder his future. He then stumbled upon the website for The Academy of Radio & Television Broadcasting. He enrolled in the Fall of 2011 and graduated in Summer of 2012. In May of 2012, Ruben launched Online with Ruben Jay, a music show where Ruben invited different musicians onto the show to discuss their projects.

In 2013, Ruben began working with NBC’s The Voice as a red carpet correspondent. This opened the door for him to work with America’s Got Talent, American Idol, The X Factor, SUITS (on USA Network,) and eventually with wrestling companies such as WWE, IMPACT Wrestling, Ring of Honor, and All Elite Wrestling.