7 Alter Bridge songs to help you survive the lockdowns 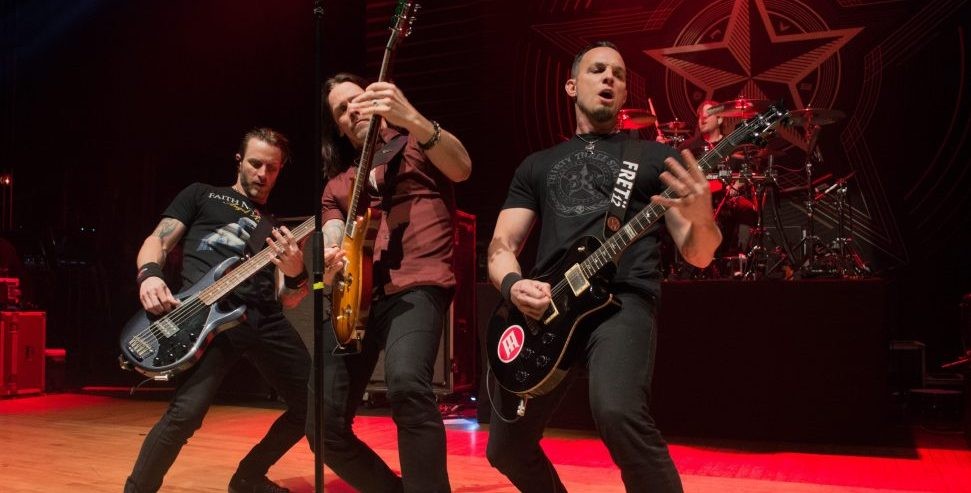 Alter Bridge, the hard rock band fronted by Myles Kennedy and former members of Creed (Mark Tremonti, Brian Marshall and Scott Philips), has become one of the biggest bands in rock today. Founded in 2004, Alter Bridge initially had a hard time breaking away from the massive shadow cast by Creed (Creed had been probably the biggest band in America in 1999).

Following Creed’s public meltdown, Mark Tremonti and Scott Philips called their old friend Brian Marshall and got to work. Tremonti would bring in Kennedy after most of their debut record had already been written.

Their first record, One Day Remains was released on the same label Creed was on, Wind-Up Records. Wind-Up attempted to put Alter Bridge into the same box as Creed, a post grunge, spiritual rock band. Tremonti had alway been leaned more towards metal than Creed’s releases did. Kennedy was most famous for his time in alternative rock band, The Mayfield Four, but also had blues and jazz roots.

As the Covid-19 shut downs continue, I find myself listening to Alter Bridge on a daily basis, so I decided to dive into their discography and pick out 7 underrated songs that have helped me get through these days.

“Shed My Skin” is off their debut record, One Day Remains. This song is deep within the first record coming in at number 10 out of 11. If you didn’t know any better, you would think that this is a Creed leftover, but Kennedy helps take this song to a new level.

Kennedy does a great job showcasing what he can do with his vocals. This song hasn’t gotten much live play on the most recent tours.

“Burn It Down” is another song off the first record that doesn’t seem to get much love. It is a ballad song that showcases Kennedy’s lower register and breathy vocals. Most of the song is a simple sounding chord progression with very simple sounding drums and bass lines.

The second verse actually showcases one of my favorite moments in an Alter Bridge song where Kennedy belts “hard to tell my nights now from my days” (also appropriate for the lockdown days we are in). This song made its return to the band’s setlist on the first leg of the “Walk the Sky Tour” when Kennedy was sick and Tremonti took over on vocals.

“Losing Patience,” according to Myles Kennedy on his solo tour of 2018, was supposed to be the lead single for the band’s 5th studio album, The Last Hero. It ended up not being a single and was eventually never played by the band (which is a shame).

This song is another appropriate song for the Coronavirus lockdowns as it can be an anthem for taking back what is yours. “Losing Patience” is an encouragement and I think it needs to make a debut on the Alter Bridge setlist.

“The Uninvited” is off the band’s 4th studio album, Fortress. This song has always been a favorite off this record. I don’t think they played it much after the Fortress tour. It has some of my favorite drum work from Scott Phillips on this record.

The band released a video of the making of this song and for some reason, I really enjoyed hearing Kennedy sing this without any of the vocal processing that happens in post-production. I also love the ending as Kennedy sings “Stone, Faced, LIAR!”. Enjoy!

“Breathe Again” is off the 3rd Alter Bridge record, ABIII. I feel like this song could have been a commercial hit for the band, an achievement they don’t appear to ever want (the band tends to release songs that are less commercial as singles – see why the band released “Isolation” as a single instead of “Ghosts of Days Gone By”). This song didn’t get much play after they toured this album either.

“Wayward One” is off their 2nd studio album, Blackbird. Blackbird is probably their most defining album ever. Kennedy’s vocals on this song in particular are top notch! He showcases his lower and upper registers, as well as telling an incredible story.

I have been to every tour since their ABIII tour and haven’t heard this song performed live. They did an acoustic version of this live at the NAMM Show in 2007.

We get a bit of the “Tale of Two Myles” on this song. The song starts out in Kennedy’s lower register with a breathy style of singing and ends with Kennedy belting out note after note.

There you have it: 7 underrated Alter Bridge songs currently helping me get through the Coronavirus lockdown. Alter Bridge has 6 records out and hours of music and videos you can consume. Make sure you go and check out the band’s main projects and if you love them, check out their side gigs (Myles Kennedy with Slash and a solo record, Mark Tremonti’s solo project, Scott Phillips in Projected, and buy a house from Brian Marshall).