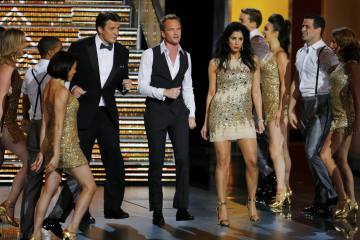 Everyone knows the Emmy Awards are meant to honor the best television of the year … which they did. But more on that later. The Emmy Awards broadcast also provided plenty of opportunities for winning (and losing) performances during the presentation itself.

SHORTEST/BEST SPEECH EVER: Merritt Wever: “Thank you so much. I gotta go. Bye.” (Watch here!)

LEAST PRESENT WINNERS: Laura Linney and David Fincher, who were honored with awards (for best actress in a miniseries or TV movie, and drama-series director, respectively) but were too busy to come accept them.

MOST HISTORIC ACHIEVEMENT: Gail Mancuso, a Modern Family director, was called out as only the second-ever woman to win in the comedy-directing category. Also noteworthy: though Kerry Washington didn’t win her race, she got to take the stage with Diahann Carroll, who was the first African American ever nominated for an Emmy.

MOST META IDEA: Even from the opening bit — in which show host Neil Patrick Harris was supposed to have binge-watched every episode of every show this season — the Emmys didn’t shy away from acknowledging the main media narrative about the Emmys: TV is sort of being replaced by online stuff. That said, when it came to the actual awards, Netflix’s House of Cards didn’t exactly win big — David Fincher took home a prize, but the actors didn’t.

MOST MOVING REMEMBRANCE: A tie, as it’s pretty hard to judge people saying nice things about their friends who died. Robin Williams on Jonathan Winters, Edie Falco on James Gandolfini — how do you choose? The surprise entrants to the category — Henry Bromell’s widow accepting the award for best writing for a drama series and Stephen Colbert’s shout-out to his mother — were equally moving.

MOST NEIL PATRICK HARRIS NEIL PATRICK HARRIS: Neil Patrick Harris! The host is known for his triple-threat-ness, but fans were probably disappointed by his nonsinging, nondancing show opener. The “Number in the Middle of the Show” number was a nod to the traditional awards-show medley, but the song was more tongue-in-cheek than it was song-in-head. The better (but also weirder) use of Harris’ dance cred came with the fact that, for the first time, the broadcast included the award for best choreography — and an intricate routine created by the nominees.

BEST TIE-IN AD AIRED DURING THE SHOW: CBS capitalized on its Neil Patrick Harris doubleheader (the actor also stars on How I Met Your Mother, the season premiere of which airs tomorrow) with an extra-long commercial/fake public-service announcement raising awareness for “excessive hosting disorder.” The problem affects millions of people, er, “just Neil.” Extra points for using the HIMYM “intervention” trope, the TV PSA format and the invention of the Ryan Seacrest Center for Excessive Hosting in Malibu.

MOST EFFECTIVE PSA: The Emmys raised some hackles when it was announced that Cory Monteith would receive an extended tribute during the broadcast, as TV stalwarts like Larry Hagman and Roger Ebert were consigned to the group-remembrance section. But Jane Lynch, in remembering her Glee co-star, put the time to good use. “His death is a tragic reminder of the rapacious, senseless destruction that is brought on by addiction,” she said.

BEST BROMANCE: Michael Douglas and Matt Damon. Though Douglas won in the category for which they were both nominated (for Behind the Candelabra) their friendship won in the acceptance speech, with the play on words about things that take two hands also ranking as the closest the awards broadcast came to a dirty joke, despite Sarah Silverman’s “look at me!” use of the word vagina in a song. (Also noteworthy in Douglas’ speech: his very open and personal mention of his troubled son Cameron.)

SPARKLIEST OUTFIT: Elton John’s epic blue jacket while performing a song in honor of Liberace and Behind the Candelabra.

And now — in order of presentation, so skip ahead for the biggies — the actual winners:

ACTOR IN A DRAMA: Jeff Daniels, The Newsroom (HBO)

ACTOR IN A MINISERIES OR TV MOVIE: Michael Douglas, Behind the Candelabra (HBO)

MINISERIES OR TV MOVIE: Behind the Candelabra (HBO)