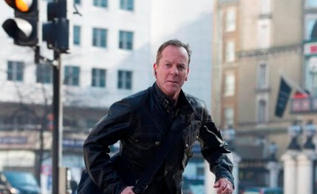 When Jack Bauer made his triumphant return last week, 24: Live Another Day wasn’t without its flaws, but it was still pretty damn enjoyable. The season’s third episode tones down the action that propelled the first two hours, and treats us largely to backstory for characters who are still not quite convincing, except for the show’s trademark habit of making the final few minutes count for something.

Jack and Chloe find the corpse of Derek Yates, easily deducing that it was Yates’ lady friend Simone that did him in, and they set off in pursuit of her. At the same time, CIA would-be hotshot Kate ignores her boss’s order to get back to the office, and instead knocks out Yates’ drug dealer, hoping he’ll lead them to Yates and by extension Jack. She’ll have to move really fast, though, because our hero has found Simone on a departing train – and there is never any scene in an action show on a train that goes well.

Simone claims that Jack is trying to kill her, which buys her enough time to slip through the crowd at the next stop, and slip right past a distracted Chloe. “You missed her? How?” Jack demands incredulously, as he should, and Chloe admits that she thought she saw her ex-husband Morris and their son Prescott – who died in a car accident sometime over the past four years. Time for a good old-fashioned Jack Bauer hug, followed by another mini-speech about how much he needs her help.

Back in the land of politics, Mark is having another meeting with his henchman Ron about his super-secret plan to hand Jack over to the Russians. Such a thing would require President Heller’s signature, and Mark says he’ll bring it to the President, but then claims he’s discussing something else when Audrey overhears them. She’s still upset about how harshly Mark came down on her father; he responds with wanting her to convince her father not to address Parliament as he’d planned. “I’ll talk to him,” Audrey says reluctantly, and we wonder how these two ever got married in the first place. Especially because Mark just forged the President’s signature on the paperwork for Jack’s rendition.

Chloe has identified Simone as their next target, and Jack instantly recognizes her as Margot’s daughter. We get a capsule backstory on our villains, followed by a cut to mother and daughter being reunited. Simone hands over the all-important drone-controlling device she took from Yates, which is then brought to her brother to do his thing with. Behind him, we see a screen of several high-profile targets for the reprogrammed drones, including the Houses of Parliament and 10 Downing Street – basically all the places in London you’d expect terrorists to attack.

What are the CIA agents up to? Kate’s having Yates’ drug dealer delivered to some people who don’t like him very much, which is enough to get him to squeal about Yates doing something with drones and someone named Tanner. As in First Lieutenant Chris Tanner, the poor soldier being blamed for the initial drone attack, who is being delivered to the U.S. Embassy in London while Jack and Open Cell search for proof of the device that framed him. Kate heads to the Embassy to question Tanner, while placating an irritated Navarro.

We get the first hint of trouble in Audrey and Mark’s marriage – after all, something has to set the stage for her inevitable reunion with her ex-boyfriend – just as Jack attempts to enter the Embassy himself to personally hand proof of the device to President Heller. It’s a plan that would work if Chloe’s smug boyfriend Adrian Cross wasn’t intentionally entering the wrong access code so that Jack is almost certain to be arrested. Like it’s not going to take Jack and Chloe all of a minute to find out who’s responsible as soon as everything hits the fan.

President Heller makes his way to Parliament, helped by the Prime Minister himself (more Stephen Fry is always a good thing). He can’t even get a full sentence out before the members of Parliament start yelling, leaving him momentarily stunned. Meanwhile, Kate and her reluctant partner Erik arrive at the Embassy just as Jack is being screened through security. He realizes there’s a problem and then all hell breaks loose. As gunshots ring out, Kate can only watch while Jack disappears into a crowd of panicking protesters.

Nothing particularly shocking happens in this third hour of 24, which is partly forgiveable in the sense that not every episode can have a jaw-dropping scene, and such scenes are harder to do now that we have had shows like Game of Thrones andBreaking Bad that routinely startle us. What we get is mostly moments that are meant to set up what’s going to happen next week, such as Jack getting into the U.S. Embassy in order to find Chris Tanner, and the CIA agents catching up to Jack for the second time. These all move the overall story along; they just don’t add up to much if you take this hour as a stand-alone episode.

The rest of the hour is devoted largely to tossing out backstory facts about characters we still don’t quite care about. Aside from the reveal regarding the deaths of Chloe’s family (sniff), the rest of this doesn’t really strike a chord. We get the obligatory scene where Chloe gives us the rundown, so now we know why Margot and her daughter became terrorists, but it’s hard to care about the drama in their family because they’re terrorists. Is the show trying to get us to sympathize with them by showing us that Simone and her husband have marital strife just like ordinary people? Well, that might be easier to do if we had more character development for her beyond being the woman who stabbed her fake boyfriend in the ear last week.

We get to see Chloe’s new boyfriend Adrian Cross being a tool (seriously, Chloe, it doesn’t take a rocket scientist to figure out he’s the guy who screwed up Jack’s access code, since there’s only like four of you in that room), and Audrey’s husband Mark continuing to be one. It’s not surprising at all that the show paints their marriage as struggling; if it wasn’t, there wouldn’t be the opportunity for her to be tempted when she runs back into Jack; we already know from the many promos FOX has aired that they’re going to meet and have a moment with at least some romantic tension. Then there’s Erik, who still comes off as a jerk but rightly asks how Kate can be so “sharp” that she can track Jack Bauer – again, nothing she’s done has been rocket science – but never figured out that her husband was a traitor. That’s a question that really deserves an answer, since it goes right to Kate’s credibility.

If nothing else, the final minutes set up something that should be vastly entertaining next Monday. Some of 24‘s best scenes have happened when Jack is in confined quarters, such as when he and Bill Buchanan were trapped in the White House in Season 7, or the episode in which Jack tries to talk down a young man who’s trapped himself inside a secure chamber. Jack inside the U.S. Embassy should be another pressure-cooker of a situation.

Yet overall, 24: Live Another Day has to decide what kind of a show it wants to be. If it wants to focus on Jack and have the other characters basically be background fodder for his adventure, that’s one thing. Kiefer Sutherland can carry the entire show by himself and it’d still be entertaining. But if it expects to keep a fully fleshed out world, and make us care about anyone whose last name isn’t Bauer, it needs to develop the other characters into more than just single-note players.

24: Live Another Day continues next Monday at 9 PM ET/PT on FOX.